I have a great number of unnatural and illogical fears.  Starts with change being heads down all the way to the impending Zombie Apocalypse (it’s coming y’all! BE VIGILANT!).  Somewhere in the middle of that is my tremendous fear of camping.

I’ve said in my “About the Blogger” post that I love The Great Outdoors.  I do.  It’s open and fresh and beautiful and makes me feel closer to God and the universe and all the things that make me feel whole, again.  The thing is…. I love it during the day.  I don’t like darkness, and the type of darkness out in the wilderness is almost consuming.  The blackness can swallow you up whole.  Plus…. who the hell is out there?  Crazy people!  That’s who!

Where did this fear come from?  It came from crazy people in the woods when I was six years old.  I went camping with my family in the Rocky Mountains.  We were camped near this beautiful stream that was so clear we could almost pluck fish out with our bare hands!  Not far away was a river.  The mountainside was covered with full pine trees and aspen trees that were peppered in with different shades of green.  We had a great day of fishing and lounging and swimming.  Nightfall came and we started a fire.  It was late.  We were stargazing, enjoying the stillness…

Suddenly, out of the darkness on the hillside not far away came a piercing scream of terror.  Not kidding.  It scared me to death.  And it wasn’t just me.  Our group had nine people who were so unnerved that we all slept in the car until daybreak when we quickly got out of there!  We never ever camped in that area again.  As a matter of fact, we never camped again, at all. 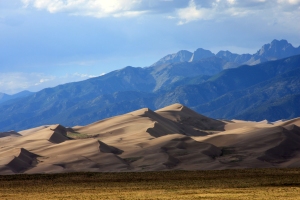 Last year some friends decided they were going to the Great Sand Dunes in southern Colorado.  They offered my family to join them and I said, “What the hell?  Let’s try it.”  And so we did.  Let me say that the beauty of this area is absolutely breathtaking!  I really wanted to go so I could photograph something different from my typical city photography.  This was magical.  But when night fell I was almost crawling out of my skin.  I had forgotten how dark it gets.  Without the fire or flashlights it was so dark that it hurt my eyes to without the light.  I tried to drink to calm my nerves and I think it did the opposite.  I had a headache.  I was terrified.  Scared. To. Death.

We finally crawled into our tent and the hubs fell asleep quickly.  I, on the other hand, didn’t.  I lied there listening to the wind and the sounds of other campers (me wondering which one of them was going to murder me in my sleep), and the wildlife.  It was hours I lied there.

Wanna know what the scariest game to play in the dark is?  “Name that sound.”  Every crunch of the earth or snap of a branch had me convinced someone was coming for me.  The hubs held onto me all night without complaint.  Which was great.  But at the end of it all, I was so scared I could barely enjoy it.

And no sex.  Trust me.  Haven’t you seen the movies?  That’s how people die first!!

My first foray into camping in 18 years was a mixed success.  I was still terrified, but I did get some of the most amazing photos I’ve ever taken in my career (as you can see from the one included in this post).

We didn’t go this year.  Maybe next year.  I’ve got Xanax, now, you know.  Maybe that will help.  Or maybe I can work through my irrational fear of being murdered in the dark?

10 responses to “The great outdoors, and why I hate camping”